Records indicate that bobbin lacemaking was well-established in England by 1600 and, as in other parts of Europe, thrived when lace was fashionable. There is little information about the early laces, but they seem to have been made primarily for the domestic market. The main lacemaking centres were in the East Midlands (Buckinghamshire, Bedfordshire and Northamptonshire) where straight laces were made, and around Honiton in Devon which specialized in part laces. There were other smaller centres but these were usually only commercially viable when lace was very fashionable and sold well.

Although references to lacemaking in Ireland go back to the 17th century, lace never seems to have been established there on a large scale, despite efforts in the 18th century to promote it by setting up schools for teaching bobbin lacemaking. In Scotland, the production of bobbin lace at Leith, Hamilton and Dalkeith was mentioned by a traveller in 1769, and a report of 1776 stated that girls from Glasgow were being sent to learn lacemaking from a French lacemaker who lived in Renfrew. However, these enterprises had disappeared by the 19th century.

When Celia Fiennes visited Devon in the late 17th century she recorded that lace made there was as fine as Flanders lace but did not wash so well. Although early records do not specify what type of lace was being made, Devon lacemakers were certainly making Brussels-style part lace by the late 18th century. The best of this lace could be as good as lace from Brussels, but the Devon industry was poorly organized in comparison, resulting in lace that was deficient both in design and workmanship. 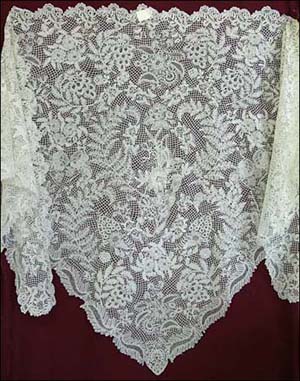 Honiton lace benefitted from the patronage of Queen Victoria, who commissioned lace for her wedding in 1840. The lace — a skirt flounce, matching dress trimmings and a veil — was mounted on machine-made net. The mid-century fashion for guipure laces led to the production of Honiton lace with the pattern pieces joined by bobbin-made plaits or bars. This lace was very popular and copies were even produced in France and Belgium. However, this very popularity led to the decline of the industry when too many workers attempted to satisfy demand by lowering their standards in order to work more quickly. There was a final lace revival in the late 1880s, when some better quality work was made, but this did not last.

In the East Midlands a lace resembling Mechlin seems to have been made during the 18th century but lighter laces with simple geometric patterns and open grounds were also made when these became popular in the late 18th century. This was when Bucks Point lace developed, often using Mechlin patterns with the Mechlin ground replaced by the simpler point ground. Much of the lace made was edgings, but by the 1820s larger pieces were being made with lace strips joined using an invisible stitch. 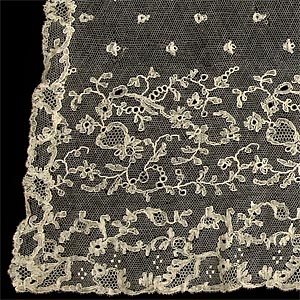 Point ground lace similar to Bucks Point was made in Malmesbury and Downton (Wiltshire), Eye (Suffolk) and in Devon, where it was known as Trolly lace. There are also records of lacemaking at Ripon in Yorkshire. 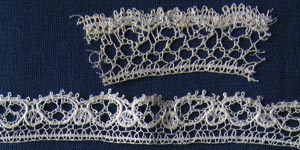 When guipure laces became fashionable in the mid-19th century, they were quickly adopted in the East Midlands as they were quicker and easier to make than the point ground laces. Initially Maltese laces were copied, and these became known as ‘Bedfordshire Maltese’ despite being made throughout the East Midlands area. However, Bedfordshire lace soon developed features of its own, and the best was well designed and made, although much was poorly made — the result of trying to produce it quickly enough to compete with machine-made laces. 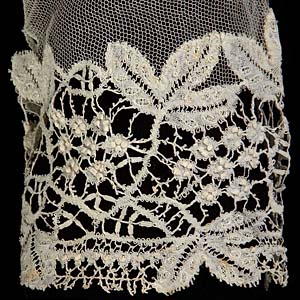 Torchon is related to the lighter laces that were made all over Europe from the late 18th century onwards, although similar lace can be seen in portraits from the early 17th century. Torchon is the French word for a duster but it is not known when this name was first applied to the lace, although it does indicate that it was a domestic rather than a high-fashion lace. It is a straight lace worked with a variety of mesh grounds and is often the first bobbin lace learnt today. 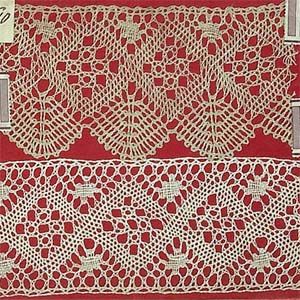 During the 19th century Torchon lace was made commercially throughout Europe and was also introduced to other parts of the world, usually by the efforts of religious organizations. It was taken up in the English East Midlands area in the 1860s and was also made at New Pitsligo in Scotland. 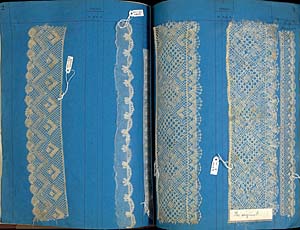 Towards the end of the 19th century several organizations were set up in the East Midlands area with the aim of helping the lacemakers who were struggling to compete with machine-made lace by finding markets for hand-made lace. The first of these was the Winslow Lace Industry which was started by Rose and Lucy Hubbard in 1875. The lacemakers associated with the Winslow industry made a variety of laces including Bucks Point, Bedfordshire and Torchon. Other organizations included the North Bucks Lace Association set up in 1897, which concentrated on Bucks Point lace, and the Bucks Cottage Workers Agency set up by Mr H H Armstrong in 1906, which sold lace by mail order on a sale or return basis. However, all of these enterprises had disappeared by the 1920s. 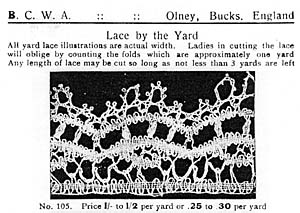 My own particular interest is English laces, and the section of my website entitled My Lace contains examples of Bedfordshire and Bucks Point lace that I have made. A floral Bedfordshire part collar I acquired is discussed in another section. I am also author or editor of several books on these laces.