When machine-made net became readily available in the first half of the 19th century it was a short step to its use instead of hand-made nets as the basis for embroidery (see Filet) or appliqué work (see Brussels). Most of the early development of net- and lace-making machines took place in the Nottingham area, and this was the main centre of the decorated net industry in England, even after machines were able to make patterned lace. Coggeshall in Essex was also a noted centre, as were Islington in London and Hamilton in Scotland; but the most well-known today are the Limerick and Carrickmacross industries in Ireland. Making decorated nets was not confined to the British Isles — there were important centres in France, Belgium and elsewhere in Europe.

In Limerick lace both needle-running — where pattern threads are run, or darned, in and out of the meshes — and tambouring — where a hook similar to a crochet hook is employed to work chain stitches — are used to outline pattern motifs and work fancy fillings. 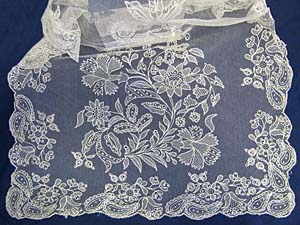 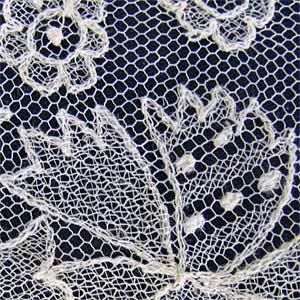 The Limerick lace industry was originally set up by the Englishman, Charles Walker. He had married the daughter of a manufacturer of embroidered nets from Essex and, after taking an interest in the business, decided to set up on his own and moved to Limerick in 1829. With him he brought 24 lace-runners from Essex, who were to teach the local women. During his lifetime the industry expanded to give employment to 1500 people, but was less successful after his death in 1842. As with the other 19th century Irish laces, standards declined until efforts were made in the 1880s to improve both design and techniques. At this time Mrs Vera O'Brien took charge of the Limerick industry, tackling everything from design to sales promotion with considerable success.

Carrickmacross lace is worked with a layer of net and an upper layer of fine fabric over a pattern. A thick outlining thread is couched along the lines of the pattern, sewing net and fabric together. Loops of thread known as twirls are also couched along the outer edge. The excess fabric is then cut away leaving the net to be further decorated with needle-run stitches. Occasionally bars of buttonhole stitches are worked over fabric and net before both are cut away giving an area of ‘guipure’. 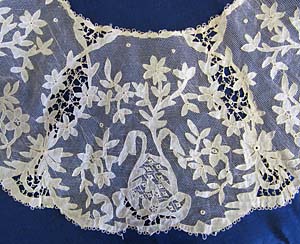 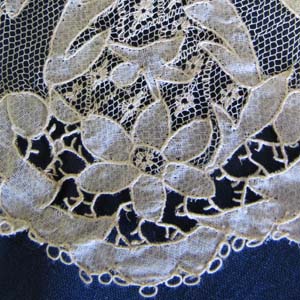 The introduction of the Carrickmacross technique is said to be based on a piece of Italian lace acquired by Mrs Grey Porter of Donaghmoyne, who taught it to local women in 1820 so that they could earn some extra money. The scheme was of limited success, and it was only after the 1846 potato famine, when a lace school was set up by the managers of the Bath and Shirley estates at Carrickmacross as a means of helping their starving tenants, that the lace became known and found sales.

On my website I describe a fragment of Carrickmacross lace that I own; and I made a rather atypical piece of lace using the Carrickmacross technique myself in an African Mask for a student at the Glasgow School of Art. But if you were under the impression that the Duchess of Cambridge’s wedding dress was made from Carrickmacross lace, I am afraid that my article, Lace for a Royal Wedding, will dispel that illusion.