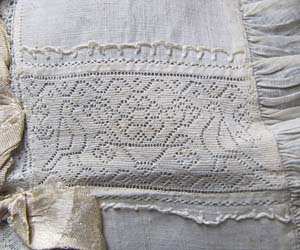 Hollie Point is an English needle lace which was used in baby clothes, particularly christening sets, in the 18th and 19th century. It is completely flat with no raised edges, and is found as insertions in caps, the shoulder seams of shirts, and in the detachable sleeves, bib and mittens which were then part of a christening set. The designs, which are traditional ones depicting flowers, birds, animals, and geometric shapes, are built up by leaving spaces between the closely worked twisted buttonhole stitches. The thread is fine and there were usually over thirty stitches per centimetre. It is thought that most Hollie Point was made at home rather than by professionals.

A flowering plant in a pot, as in the illustrated insertion from a baby’s cap in the Lace Guild collection, is often found; and it is said to symbolize the Lily of the Annunciation. The buttonholed loops are a common decorative feature on 18th century caps.