Flanders (what is now Belgium and part of northern France) was an important centre for bobbin lacemaking from the 16th century onwards. The industry was well organised with skilful designers, aware of the demands of fashion, and innovative lacemakers who were able to work out techniques for the new designs. In the mid-17th century Flemish bobbin lace was the major fashion lace in Europe until changes in fashion led to the dominance of Venetian and French needlelace in the last quarter of the century. Not until the 18th century and further changes in fashion did the classic Flemish bobbin laces emerge and become so successful. 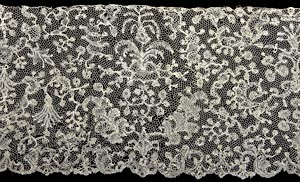 At the start of the 18th century fashions favoured the use of fine muslin instead of lace for cravats, ruffles and flounces, which led to a decline in the lace trade throughout Europe. However, it was the skill of the Flemish lacemakers using the incredibly fine Flemish linen thread to produce delicate new laces that brought lace back into favour in the fashionable world. These new laces might look like muslin from a distance but, despite their fineness, there were richly patterned. 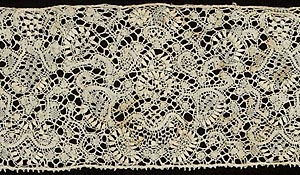 This was also the time when distinctive techniques first became associated with the lacemaking centres of Brussels, Mechlin and Valenciennes, although lace made with these techniques was also made in other towns. 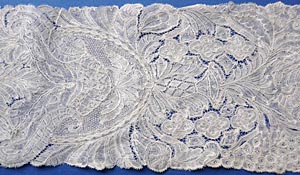 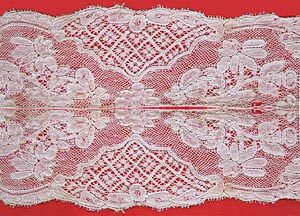 Brussels was a part lace where the pattern motifs were made separately and later joined together with a variety of grounds. Mechlin and Valenciennes were both straight laces but differed in that the cloth-stitch areas in Mechlin were surrounded and emphasized by a thicker gimp thread, whereas Valenciennes lace was completely flat with lines of tiny holes outlining the pattern motifs and picking out features within them. 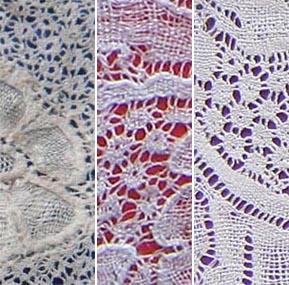 Despite the differences in technique the designs were usually very similar and often followed changes in the patterning of fashionable French silks. In the early 18th century the laces were quite dense with bars or decorative grounds in the small spaces between the motifs, but in the course of the century the space between the pattern motifs increased and distinct grounds became associated with the different techniques, leaving the fancy grounds relegated to small fillings. Drochel ground, a hexagonal plaited mesh, was used to join the Brussels motifs, while a similar ground with shorter plaits, Eis ground, became the usual ground for Mechlin. 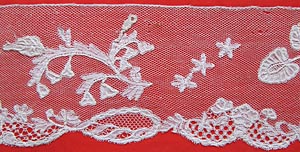 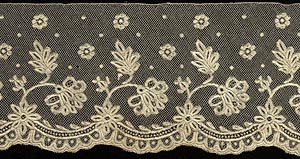 Valenciennes itself ceased to be a lacemaking centre after the French Revolution, and most 19th century Valenciennes lace was made at various centres in Belgium. The lace was slow to make and always expensive, but its smoothness and strength meant it washed well, so it was popular for underwear and babies’ clothes. Most of the lace was made in the form of narrow edgings and insertions. Mechlin lace did not fare so well in the 19th century — the technique was unsuitable for the larger fashion accessories required in the second half of the century and neither was it ideal for the same uses as Valenciennes.

The lace designs of the late 18th and early 19th century with small pattern motifs largely confined to the edges of the lace meant that for the Brussels part laces it was easier to make the drochel net separately and then apply the motifs rather than working the net to join the motifs. When machine-made net became readily available in the 19th century, that was used instead of the expensive drochel net, which from about 1850 was only used for very special orders or exhibition pieces.

In the course of the 19th century fashions changed, and for most of the second half elaborate, often naturalistic, designs were favoured. Brussels part lace, applied to machine-made net, was ideally suited to the new designs and remained popular for the rest of the century. The lace, known as Brussels Application, was often a mixture of needle and bobbin lace, in some pieces in about equal proportions while in others the needle lace was a simple filling of rings or spots. 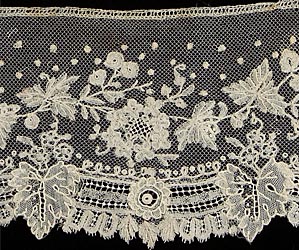 In the mid-19th century a growing interest in laces grounded with bars, rather than a mesh ground, led to the development of a new bobbin lace called Duchesse in honour of the Duchess of Brabant, later Queen of the Belgians. Duchesse laces are generally divided into two groups — Duchesse de Bruges, which is all bobbin lace, and Duchesse de Brussels, with needlelace fillings or inserts of Point de Gaze lace. The names reflected the main centres at which the laces were made, but both were made elsewhere in Belgium. There was also Dentelle de Bruges made with coarser thread from which the Bruges flower lace that we know today is descended. 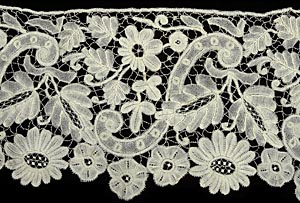 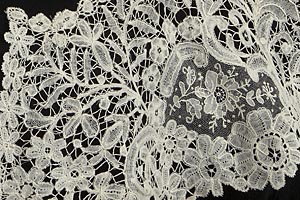 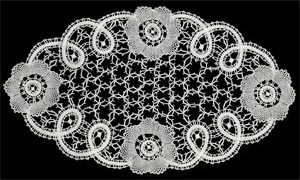 On my own website I discuss a Brussels Application stole from my collection.