During the second half of the seventeenth century several government-sponsored industries were established in France at the instigation of Jean-Baptiste Colbert, Louis XIV’s finance minister, who was concerned at the amount of money leaving France to be spent on luxuries including Venetian lace. In 1665 a Royal Proclamation set up a government-backed lace industry which would compete with all foreign laces. By offering favourable terms, Colbert was able to persuade experienced lacemakers to move to France from both Venice and Flanders. These lacemakers were sent to towns selected as centres for the new industry, with the Venetian lacemakers going to Alençon in Normandy where Colbert had a chateau. Needle lace was already being made in Alençon, and at first it proved difficult to persuade the local lacemakers to adopt the new techniques and patterns. However, within a few years high-quality lace was being produced and the Alençon industry flourished, helped no doubt by a strictly enforced ban on the importation of foreign lace. 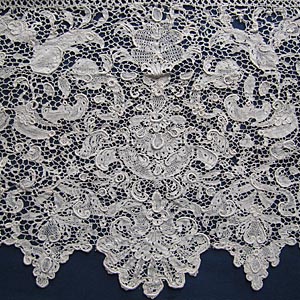 At first the lace produced in Alençon was similar in style to Venetian lace, but by the 1680s a distinctively French lace, now known as Point de France, was being made. In this lace the design is made up of small motifs often arranged round a vertical axis, and the linking buttonholed bars, decorated with picots, show a mesh-like regularity. 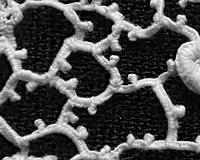 In the course of the 18th century the designs changed to suit contemporary fashion, and by about 1730 decorative meshes had become increasingly important in lace design. Initially Argentan, a regular mesh of buttonholed bars (named after the Argentan, a town near Alençon where needlelace was also made), was the most common ground. 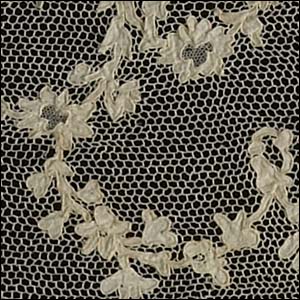 The next most common was a decorated version now known as Argentella. 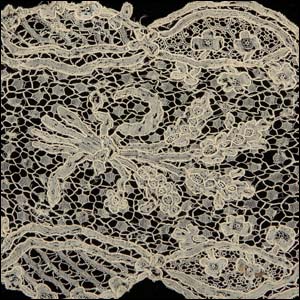 The mesh of twisted buttonhole stitches known as Alençon does not seem to have become common until the 1750s. 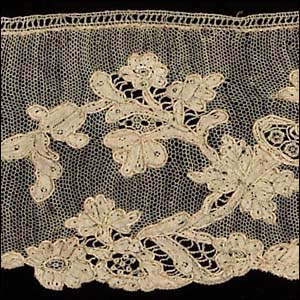 By the end of the 18th century designs were much lighter with a pattern area along the headside, often decorated with fillings of tiny buttonholed rings and large areas of mesh ground dotted with small asymmetrical motifs. Tortillé ground, an alternative to Argentan ground, was also used. This had large meshes reinforced by whipped threads instead of buttonhole stitch. 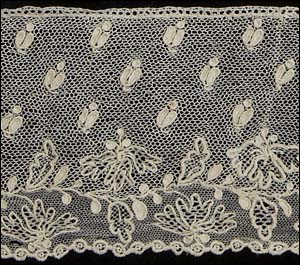 After the French Revolution the lace industry suffered badly because of its association with the aristocracy. Napoleon tried to revive the industry in the early 19th century but his efforts met with little success. Later in the century there was a revival of sorts when rich, floral designs became fashionable. However, changes in fashions and competition from machine-made lace meant that the industry did not survive into the 20th century.

On my own website I discuss an edging of Alençon lace from my collection.