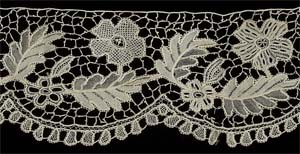 Ireland was not really a lace-making country until the mid-19th century when various crafts were introduced or promoted to help provide employment and alleviate poverty at the time of the potato famine. Irish needlelace was developed in several centres, with the most successful being in Youghal where a school was opened in 1852 after Mother Mary Ann Smith of the Presentation Convent had learnt the techniques by unpicking some old Italian needlelace. 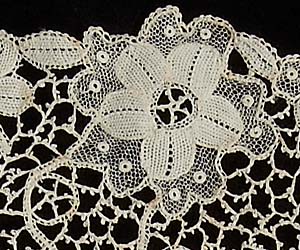 Mrs Jane Maclean, wife of the rector of Tynan, Co Armagh, also started a lacemaking school after unpicking some Venetian needlelace to discover the techniques used. Mrs Maclean died in 1859 but her daughters continued teaching needle lace in Tynan until 1865, when Emily Frances moved to Co. Fermanagh where her husband, Rev George Tottenham, had been appointed to the parish of Inishmacsaint. Her sisters, Sarah and Lizzie, also moved to Inishmacsaint where, encouraged by Rev Tottenham, they set up a new lacemaking school which became very successful. Inishmacsaint lace was made with locally produced linen thread, and the designs were to a large part based on those of 17th century Venetian Gros Point lace.

The needlelace industry declined in the 1870s due to a combination of poor design and workmanship, often coupled with the death or departure of the founders of the various enterprises. However, the 1880s saw a determined effort to improve both design and techniques in the Irish craft industries. One result of this was the development of a distinctive needlelace associated mainly with the Presentation Convent in Youghal. This new lace was characterized by the buttonholed loops, usually with scallops of additional buttonhole stitches, which surrounded the motifs and outer edge of the lace, a variety of filling stitches, and the mesh ground of irregular bars decorated with picots. The fine fan leaves, collars and other small accessories made using this technique found a ready sale in fashionable circles. The Presentation Convent at Youghal also made reproduction lace in 18th century style, while heavier needlelace based on 17th century Venetian lace was made in the Convents at Kenmare and New Ross. 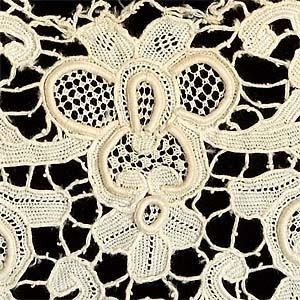 Attention was also paid to design at Inishmacsaint where Ellen Hassard, a talented local lacemaker, was given a scholarship so that she could attend the School of Art in Dublin. She eventually took over the running of the Inishmacsaint school and lace industry in the early 1900s. However, although she continued with designing and making lace for several more years, changing times and fashions meant that by 1930 the industry had ceased to exist.