Lacemaking was introduced to Malta and the neighbouring island of Gozo in the 1830s when lacemakers from Genoa in Northern Italy were brought to the island to teach the local women and children during a time of famine. The lace that the Genoese lacemakers brought with them had evolved from the Genoese lace of the 17th century with its wheatears and plaits, and it was from this that the style of Maltese lace developed. However, instead of using linen thread the Maltese lacemakers used silk imported from Barcelona. 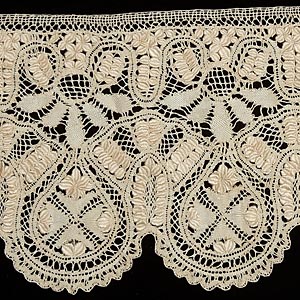 The industry developed quickly and Maltese lace attracted great interest when it was displayed in London at the Great Exhibition of 1851 as it was ideally suited to the current fashion for bold guipure-style laces. By the end of the 1850s copies of Maltese lace were being made in the Le Puy area of France, in Barcelona, near Genoa and in the East Midlands area of England. This was when the Maltese Cross was probably introduced into the designs to distinguish true Maltese lace from the many copies. 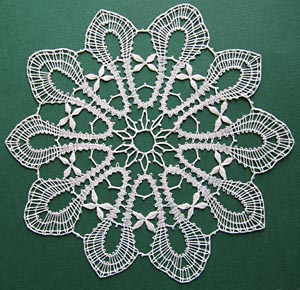 Bobbin lace was made at several centres in Germany, but the best known is probably Annaberg and surrounding towns in the Erzgebirge region of eastern Germany. The laces made there in the 18th and 19th centuries included versions of Mechlin, Valenciennes, and Blonde, although the speciality seems to have been guipure-style laces which were given local names. It was only at the end of the 19th century that a distinctive lace style was developed in the Erzgebirge. The new lace, named after the town of Schneeberg, needed few bobbins and so could be made quickly — important at a time when lacemaking by hand was struggling to compete with machines. 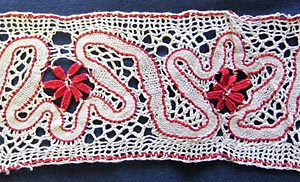 Lace came to Russia from the West and remained in part a westernized, fashionable fabric, although it also became part of Russian peasant culture. The typical braid bobbin laces which were made for peasant furnishings and dress into the 20th century had their origin in Milanese lace of the 17th century. However the Russian versions, which often included coloured threads, are probably based on copies made in central Europe. During the 19th century versions of fashionable European bobbin laces including Mechlin, Valenciennes and Blonde, were also made in Russia. 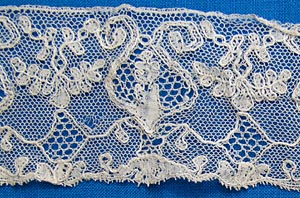 The name of Tønder, a lacemaking centre in Denmark, is usually associated with the point ground lace that was made there in the first half of the 19th century and later revived in the early 20th century. However, records indicate that lace was being made in Tønder as far back as the end of the 16th century and continued to be made there during the 17th and 18th centuries in whatever style was fashionable and would sell. 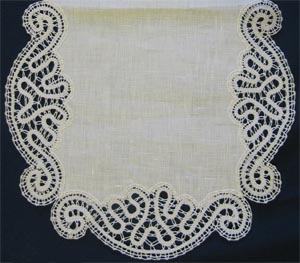 Records of lacemaking in the area which is now Slovenia date back to the 17th century when it was reported that laces in the Flemish and Venetian style were made there. However, the Idrija lace for which the country is now known was developed by Ivanka Ferjančič, director of the lace school in Idrija, in the 1870s. It is a braid lace made with very few pairs but the designs and techniques are distinctive and different from those of other braid laces.