These two laces are both based on the 17th century Spanish Sol lace — a form of drawn-thread work with circular patterns built up on a skeleton of woven threads. By the 19th century the way the lace was made had changed and there were differences between the methods used for the lace known as Tenerife in Spain and Nanduti in Paraguay and other parts of South America. 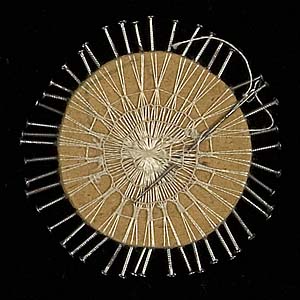 The easiest method is to make the wheel-like motifs separately on fabric-covered circular cards or blocks with pins stuck in around the edges. The thread is first taken to and fro across the circle around the pins. Once these radial threads are in place the pattern is woven in with a needle. The finished motif is released by removing the pins and the motifs are later joined together. 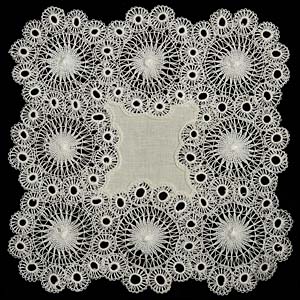 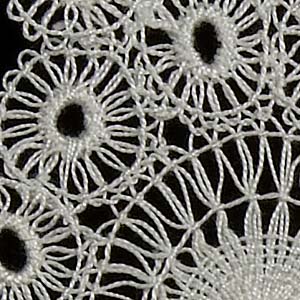 This method was taken up enthusiastically by amateur lacemakers in Europe and America, and manufacturers produced many ‘patent’ Tenerife wheels, some with two rows of holes so that different sizes of motifs could be made.

In the other method the lace is worked on fabric which is stretched tightly in a frame. The pattern is drawn on the fabric and the threads which go to and fro across the circular motif are either taken through running stitches worked along the pattern lines or stitched directly through the fabric. When finished, the motifs are released by either cutting the running stitches or cutting away the backing fabric. While single motifs can be worked like this, it is more usual to work the whole item as one piece — the pattern for the complete mat or collar is drawn on the fabric and the wheels are linked together as the radial threads are laid down. 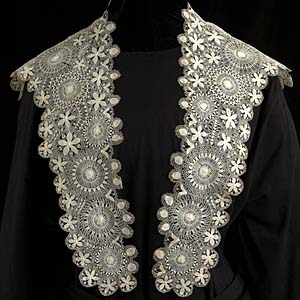 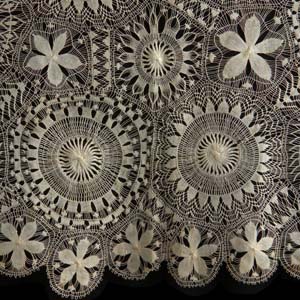 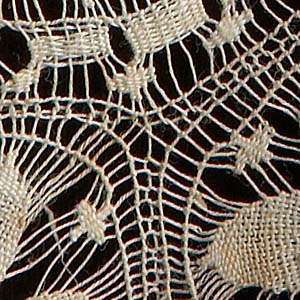 The delicate Nanduti lace made with fine cotton or silk which achieved great popularity in the late 19th century was made using this method. Nanduti lace is still made like this in South America but is now often brightly coloured. 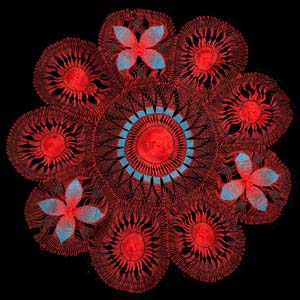