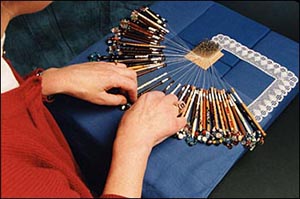 Bobbin lace is worked with many threads, each wound onto a separate bobbin. The pattern (pricking) of pin-holes is marked on stiff card and is fastened to a firm pillow. This was traditionally packed with straw, but nowadays polystyrene (styrofoam) is generally used. The threads are fixed at the start of the pattern, although more can be added (or some removed) as the work progresses. All the stitches involve two pairs of bobbins, i.e. four threads. Once the stitches have been made they are held in position with pins pushed through the pin-holes in the pricking into the pillow. The pattern motifs, which can be outlined with a gimp (a thicker thread), are usually worked in cloth stitch (forming areas resembling woven cloth) or half stitch (giving a more open effect), although more elaborate filling stitches are also used.

Bobbin laces can be worked in three different ways. In straight laces the motifs and ground of meshes or bars are made in one continuous process, which sometimes requires the use of large numbers of bobbins. In part laces the motifs are made separately and then joined with bars or a mesh ground; this is a method which allows several lacemakers to work on one piece. In braid laces a braid worked with relatively few pairs meanders across the pattern with the curves linked by ‘sewings’ or bars. Once the lace is finished it is released from the pillow by removing the pins.

The different styles of lace are often named after the place where they were first made, but once they became fashionable they were quickly taken up by other lacemaking centres. For example, when Maltese lace was introduced in the mid-19th century it was soon being made in other countries including France, Spain, Italy and England.