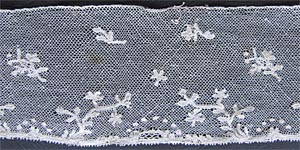 Lille, like Valenciennes, was a Flemish lacemaking town ceded to France in 1678. In addition to making Mechlin and Valenciennes, it also made laces for the lower end of the market. These laces with simple geometric patterns against light open grounds became fashionable in the 1760s and 1770s, and it was at this time that the fond simple or Lille ground was developed. This ground, also known as point ground, could have originated in Lille, and by the 19th century was in use throughout Europe. Lille is a straight lace with the pattern outlined with a thicker thread. In the earlier laces the pattern is rather thin and straggly, but later 19th century designs were more floral.

The silk lace known as blonde because of its colour first became popular in the 1750s. It is a straight bobbin lace with the ground worked in fine thread and the pattern areas emphasized by the use of a thick floss silk, used as outlining gimp and within the pattern. The ground is usually fond simple although Paris ground (kat stitch) is occasionally used. At the beginning of the 19th century Chantilly, a small town north of Paris, and Caen, in Normandy, produced the finest blondes, and by the 1810s and 1820s blonde lace had become so popular that it was used for flounces, stoles, veils and even whole dresses. Blondes were also produced in Bayeux from the late 1820s and it was here that Lefébure, a leading lace manufacturer, developed trade with Spain and Spanish colonies by producing a more heavily patterned blonde which was also made in black. 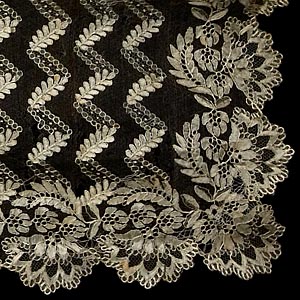 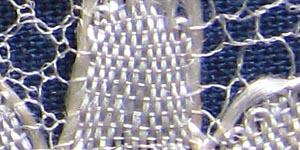 By the late 1830s and 40s black lace was becoming popular, and the lace manufacturers in Chantilly developed the use of dull black silk thread known as grenadine. In contrast to blonde lace, the pattern areas were worked in half stitch giving a delicate lace which could be displayed over the coloured dresses of the period to wonderful effect. By 1850 manufacture of Chantilly had spread to Caen and Bayeux, and it was used for every sort of accessory. For large flounces and shawls the designs were divided into smaller strips to make working easier, then joined almost invisibly. 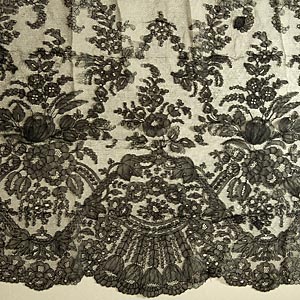 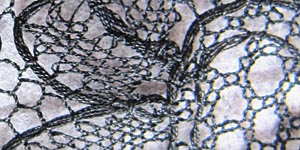 The town of Le Puy and the surrounding region of the Auvergne have a long lacemaking tradition dating back to the 17th century. Then and in the 18th century the area produced many of the simpler, cheaper types of lace. The industry suffered a decline at the beginning of the 19th century and did not revive until the 1820s and 1830s, when various manufacturers made improvements. One of the innovations was production of a black silk guipure (the name given to a lace grounded with bars rather than a mesh) and then of a white guipure in imitation of the Maltese lace that was becoming popular. These were the laces for which Le Puy was to become known, although these guipures were also made elsewhere and other laces were made in the Le Puy area. One of these latter was the so-called Cluny lace, reputedly modelled on old laces in the Cluny Museum in Paris, although the name is now usually given to simple guipure laces wherever they are produced. 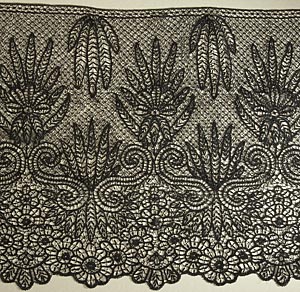 The lace industry at Mirecourt in Lorraine was similar to that of Le Puy. In the 18th century it produced the cheaper types of lace mainly for export. The industry flourished in the mid 19th century when, in addition to Lille lace, it made black and white guipure laces of the Maltese type and, rather surprisingly, a Honiton style lace. According to the Jury Report of the Paris Exhibition of 1867, Cluny lace was an invention of Mirecourt although this was disputed by Le Puy. 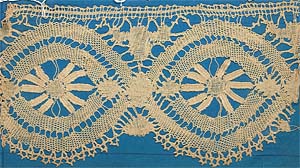 I have an article about a Chantilly tie on my own website.