Bobbin lacemaking in Italy dates back to the 16th century when the main centres were Genoa and Milan, although Venice also made bobbin lace. The Genoese laces were characterized by wheatears, small tightly woven leaf-shaped tallies which formed part of the usually geometric design. By the middle of the 17th century this style of lace was no longer fashionable but the designs continued to be made for domestic use and were still being made in some parts of Italy in the 19th century.

The fashionable Italian bobbin lace of the latter half of the 17th century was the one now attributed to Milan, although it is possible that it was also made in Venice and Genoa. In a similar way to the Venetian needlelaces, Milanese bobbin lace was made in different styles — flowing Baroque designs comparable to Venetian Gros Point, delicate open designs equivalent to rose point, and small branching patterns resembling the later flat needlelaces. It was a part lace made up of curving braids which were joined where they came together. Occasionally the edges of the braids are outlined with a heavy cord, possibly an attempt to copy the padded edgings of Venetian needlelace. Spaces between the braids could be left empty or the braids could be connected with either plaited bars or a mesh ground. The braids, particularly in the flowing Baroque designs, could be very elaborate with a wide variety of patterns and decorative stitches. Other stitches and sometimes even pictorial motifs were also used to fill spaces between the braids. 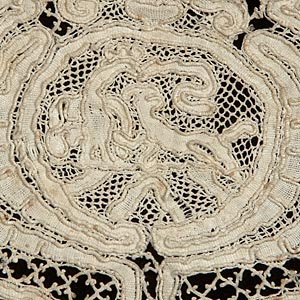 By the late 17th century lace of the Milanese type was made throughout northern Italy and had spread both north-east over the Alps to central Europe and south to the mountains of central Italy. It was worked mainly for the Church, and lacemakers in these areas continued to produce lace in the 17th century style during the first half of the 18th century or even longer, so that lace of this type is difficult to date accurately. 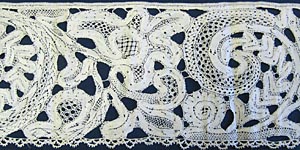 Similar Baroque-style laces were also made in Flanders in the 17th century, and these can be difficult to distinguish from Milanese laces. However, there are subtle differences in design and technique, and while the Milanese laces tend to be more tightly worked, the Flemish laces are often in finer thread.

Bobbin lace continued to be made in Italy during the 18th and early 19th century, but there were no innovations until a revival of interest in the late 19th century led to schools being set up in various centres. One of these was in Cantú, a small town to the north of Milan, where a braid lace with a distinctive style and technique developed. 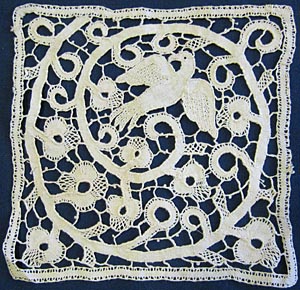