It is recorded that in 1769 four Irish girls were sent to an Ursuline Convent in Paris to be taught the craft of crochet. On their return they were to teach crochet to other Irish girls. However, the craft did not become established and had to be reintroduced in the 19th century, one of the first centres being the Ursuline Convent at Blackrock in Cork where a school was opened in 1845. The school was widely copied after the potato famine, and the one established at Clones in Co. Monaghan became one of the most successful of the Irish crochet centres. Crochet was made in a variety of styles including imitations of 17th century Venetian needlelaces. 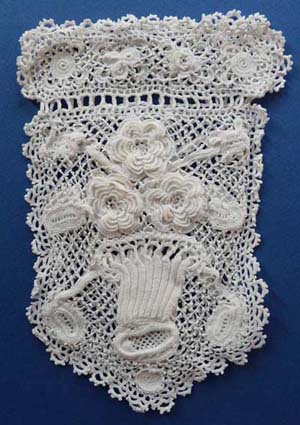 In the mid-19th century the Irish crochet industry, like the other Irish lace industries, had problems of poor design and technique, but seems to have fared rather better. The improvement in design and better organization introduced in the late 19th century was particularly successful for the crochet industry, as crochet copies of Venetian laces with padded rings and other raised effects were ideally suited to the current vogue for heavy three-dimensional laces. Irish crochet reached a height of popularity around 1905 to 1910, and was used to make every form of accessory and larger items including coats and dresses. Patterns for Irish crochet were published throughout Europe and America, so only some of what survives was actually made in Ireland.

Vast amounts of crochet were produced in the 19th and 20th century by amateur workers. Hundreds of patterns were published, many featuring rosettes or the hugely popular pineapple motif. Some patterns even imitated bobbin lace designs, while filet crochet designs — in which solid areas are worked within a square grid — were much in demand for church and table linen.