Macramé is made by knotting multiple threads. It is thought to be a very old craft and a few macramé examples have survived from the late 16th and early 17th century. Most of them are small, fine costume pieces similar in style to the early bobbin and needlelaces. The more elaborate needle and bobbin laces that developed in the course of the 17th century could not be copied in macramé but the technique probably survived in peasant communities particularly in Spain, and parts of Italy and Germany. 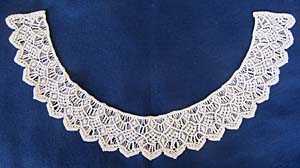 Macramé returned to popularity during the late 19th century, when it was fostered by the sponsors of the Italian lace revival, and also developed again in Spain. Some fine copies of the early 16th and 17th century macramé were made, but most of the work was on a larger scale and included more fancy knots. 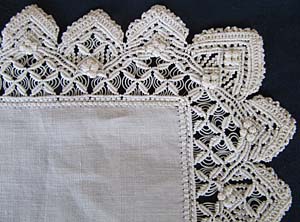 Greek finger lace, which uses macramé techniques, is still being made on the Greek island of Crete, where it is known as ‘desia’ or ‘desies’. It can be worked using the warp ends of woven fabric or made separately and added later. Often made in bright colours, it was traditionally used to trim the ends of the ‘petsetas’ (table runners) which were part of a girl’s dowry.

Margaretenspitze also uses macramé techniques. It is named after Margarete Naumann who developed and promoted the lace in Plauen, Germany in the years following World War I. Her work was exhibited widely in Germany and created considerable interest. However, her efforts to popularise the lace met with little success, and until the publication of a book about Margaretenspitze in 2000 it had been almost completely forgotten.