The enthusiasm for lace in the late 19th century led to a number of new or revived techniques becoming popular. One of the most important gave rise to a large group of laces based on a foundation of woven tapes. The technique used was similar to needlelace, but a tape outlining the pattern motifs was tacked in place instead of foundation threads. The motifs could then be filled with needlelace stitches and bars worked to connect them. This was not a new technique — in the 17th century imitations of Venetian needlelaces were made relatively quickly with tapes replacing the elaborate outlines of padded buttonhole stitches. 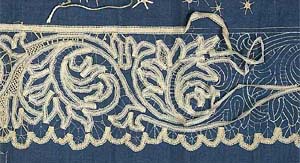 The 19th century tape laces varied from well-worked versions with a variety of filling stitches to those where the tapes were simply joined with a few needle-made bars, and they came with an equally wide variety of names — modern point lace, Renaissance, imitation Greek, Venetian, Damascene, and Battenberg being just some of them. Manufacturers produced a huge number of suitable tapes in different widths and sometimes with picots or other decoration. 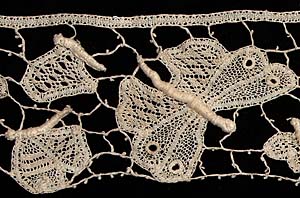 Making tape laces was a popular craft, and patterns were widely available in shops and magazines. However, tape lace was also developed on a professional basis in some places. Branscombe in Devon was one of these, where it was probably introduced by John Tucker in the late 1860s as the market for Honiton started to decline. Typical of Branscombe lace are the edging of buttonholed scallops, bars decorated with nibs (tiny buttonholed rings), woven spider wheels and a variety of fillings. 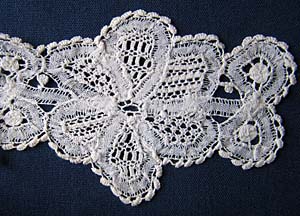 Tape lace was also made in Ireland at Borris, where an industry was set up by Lady Harriet Kavanagh in 1846 to help support women on the Borris estate at the time of the potato famine. Patterns were copied from old laces, possibly acquired by Lady Kavanagh while travelling in Europe. The names of the old laces were copied as well — a sales list records both Flounce of Point de Venise and Flounce of Point de Milan. Later Lady Kavanagh’s granddaughter May married and moved to Scotland, where in 1908 she set up an associated lace industry in Ballantrae. Account books at Borris House record sending patterns and materials to Ballantrae, and the lace made there is identical to that made in Borris. 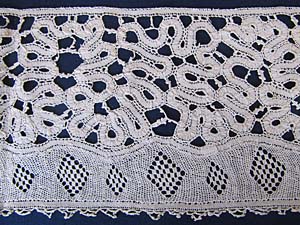