Although knitting itself is an old craft, lace knitting does not seem to have developed until the late 18th century. It became extremely popular during the 19th century when items from small mats to large shawls were produced. During the second half of the century a cottage industry developed in the Shetland Isles using the fine wool from the local sheep to knit delicate shawls — the best were so fine that they could be pulled through a wedding ring.

Estonia and the Orenburg district of Russia are other regions with a tradition of producing fine knitted lace shawls.

Small mats or doilies from the Azores similar to the one shown here are among the knitted items at the Victoria & Albert Museum, where they are dated to between 1875 and 1900. According to an 1893 article in Harper’s Bazaar, doilies like these were knitted on “five, very fine, slightly curved, barbed needles”. 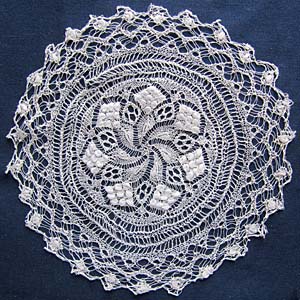